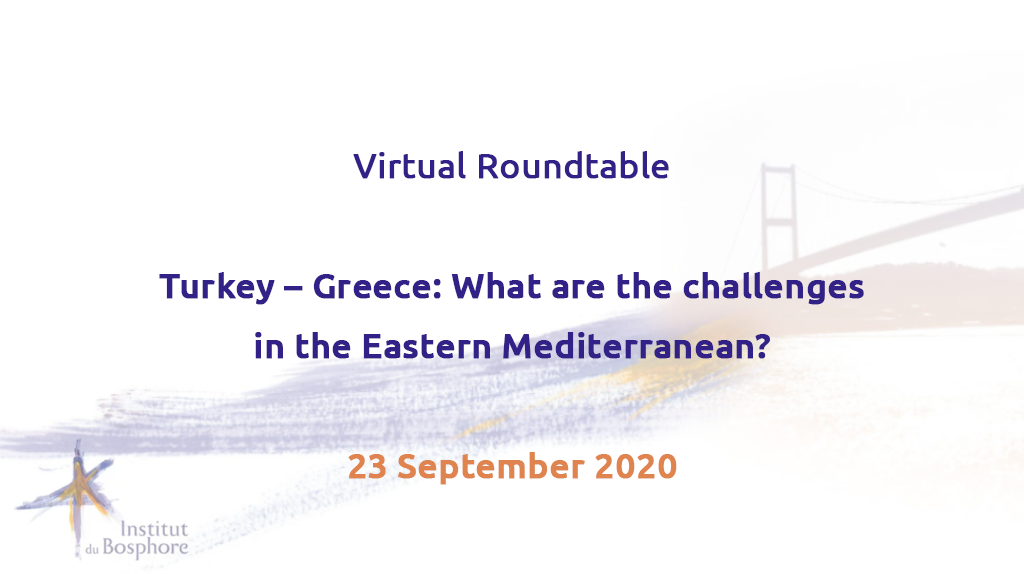 23 Sep Virtual Roundtable “Turkey – Greece: What are the challenges in the Eastern Mediterranean?”

Posted at 09:22h in Events & Collaborations by leman 0 Comments

In the current escalation between Turkey and Greece over energy resources in the eastern Mediterranean, although tensions have come down a notch, both NATO members accuse each other for maximalist approaches in the region, source of a long-lasting conflict about sovereignty and maritime delimitation on the natural resources.

The virtual round table of Institut du Bosphore tackled pivotal questions regarding the main challenges in the Eastern Mediterranean and explored ways to restore constructive dialogue. The debate chaired by Didier Billion, Deputy Director, IRIS & Board Member, Institut du Bosphore was introduced by Serhat Güvenç, Professor of International Relations at Kadir Has University and Yves Bertoncini, Consultant and Teacher in European Affairs and President of the European Movement in France.

During the meeting which brought together several members of the Institut du Bosphore Scientific Committee and intellectuals from France and Turkey, participants highlighted the need to maintain in all circumstances a constructive dialogue between the EU and Turkey in order to contribute to the de-escalation within an objective approach and on the grounds of rules-based cooperation.

Mr. Billion pointed out that there is a real difference between Paris and Berlin’s opinion, understanding and perception on the issue. “Despite divergences within the EU and vis à vis Ankara, nothing can replace the force of negotiations, difficult but necessary” he added. Mr Bertoncini also stressed the need to restore trust between the EU and Turkey in a visionary and forward-looking approach.

Furthermore, Mr. Güvenç underlined that the EU can further contribute to strengthening Greek-Turkish relations by supporting civil society initiatives as she did in the early 2000s : “In the first decade of the Turkish-Greek rapprochement, the EU funds enabled the NGOs from the two countries to implement projects promoting mutual understanding and cooperation. The EU should revamp its grants program to support Turkish and Greek NGO in building a sustainable peace between the two countries with greater civic involvement.”