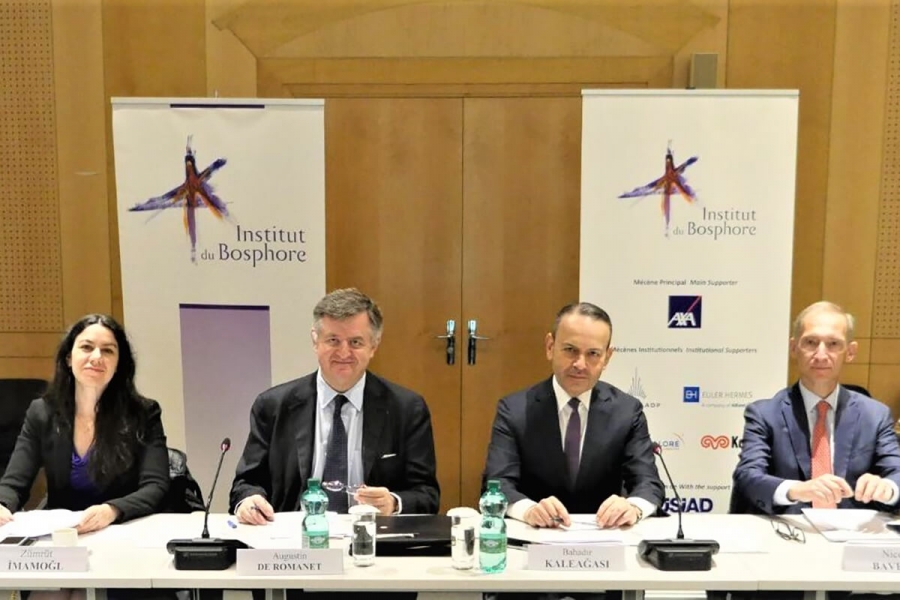 Posted at 21:55h in Scientific Committee Meetings by leman 0 Comments

The Institut du Bosphore Scientific Committee held its 14th meeting on Friday, 19 April 2019 in Paris at the AXA Headquarters. On the agenda: Macroeconomic outlook for Turkey and the EU, the yellow vest movement in France, populism in Europe and the impacts of digital transformation on international relations…

During his opening speech, Augustin de Romanet, Chairman and CEO of ADP Group and Co-President of the Institut du Bosphore Scientific Committee stated: « The ties uniting France and Turkey are the legacy of a multi-secular diplomatic tradition. On the eve of the centenary of the Turkish Republic, this heritage must be honored by strengthening bilateral initiatives and maintaining an open and transparent debate. » Bahadır Kaleağası, President of Institut du Bosphore, underlined the importance of Turkey’s European integration process and the role of the Institute in this context : « The exchange of data, analyses and reflections within this Institute have become increasingly important today and opens up new horizons. A strong Europe is good for the world. For a better functioning EU-Turkey relationship, the Paris-Ankara axis should immediately focus on opportunities for the European integration of Turkey. » The need for modernization of the Customs Union agreement between Turkey and the EU was particularly emphasized.

During the debates, the macroeconomic outlook for 2019 after the 31 March local elections in Turkey was presented by Zümrüt İmamoğlu, Chief Economist of TÜSİAD. For the session entitled « Yellow Vests beyond France: European elections and populism in the world? », the introductory remarks were presented by Nicolas Baverez, economist, lawyer, historian who made the following assessments: « The crash of globalized capitalism has turned into a major crisis of democracy with the destabilization of the middle classes of developed countries. The large European market has become the adjustment variable of the great confrontation between the United States and China. Faced with new empires, Europe must be rebuilt around sovereignty and security. The historical challenge of the 21st century is the preservation of political freedom facing the renewal of political and religious passions. »

The thought provoking debate sparked further engagement by the participants who are expected to meet again at the 10th Bosphorus Annual Seminar on 10 and 11 September 2019 in Istanbul.

On 18 and 19 April, 2019, Institut du Bosphore also held meetings with Jean Pisani-Ferry, economist; Charles Sitzenstuhl, Political Advisor to the French Minister of the Economy and Finance; and HE İsmail Hakkı Musa, Ambassador of Turkey to France. A visit was organized to Schneider Global Innovation Hub to discover the latest innovative technologies for energy efficiency.